Highlights of the summer

It's a while since I last posted anything here, so this is a brief summary of a few of the highlights of the summer. I'll hope to have some more posts to send out very soon.

We continue to have a selection of wild orchids in our garden, though the numbers of mosts species have dropped off considerably. We counted around 500 Dactylorhiza fuchsii a few years ago, but now we are getting less than 30, and only 3 Platanthera chlorantha made it into flower. In addition, the D. fuchsii have mostly been coming up in our drive, where they shrivelled away in the hot weather.

However, new arrivals were 3 Dactylorhiza fuchsii x purpurella - the hybrid between Common Spotted and Northern Marsh Orchids. Here is just one of them. 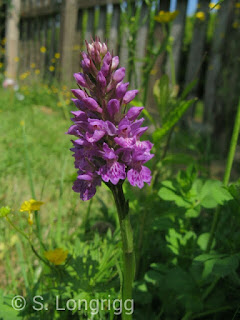 D. purpurella has been in the park by our house, so it's not surprising that this hybrid should have appeared.

An exciting discovery last year in the woods near our house was Corallorhiza trifida, Coralroot Orchid. This was not known to be present in the area and we found 2 small groups of them within walking distance of our house. 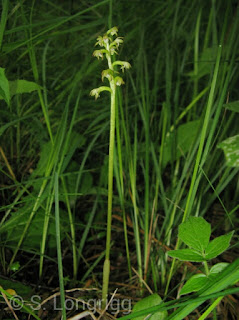 This year we were pleased to find that the numbers at both sites had increased.

Nearby in the same woods, while searching for more Corallorhiza, I  came across this dragonfly which had just emerged. 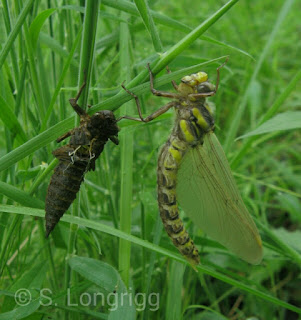 I saw this Orange-tip butterfly while out with our natural history society. 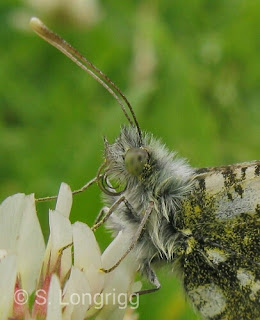 I have been monitoring a site in Perthshire which has large numbers of Bog Orchids (Hammarbya paludosa) since finding it a number of years ago. Despite the dry weather, this year I had the best count ever with a total of 141 flowering spikes. I think this is now the largest site in Scotland apart from one in Shetland. Here are just a few of them. 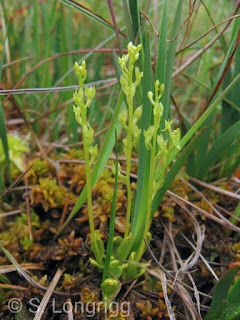 It's rather hard to count them when they are difficult to approach without risking trampling on them. I find the best method is to take numbered plastic plant tags with either a paper clip or a magnetic strip attached. I throw one to land beside each plant, so I know which ones I have already counted. Afterwards I pick up all the tags with a magnet on an extending pole.

The season is now almost at an end so I'm looking forward to having more time for arts and crafts. I'll also hope to create some more posts here.
Posted by Fred and Sarah at 2:34 PM

Fred and Sarah
We live in Scotland, UK, and we are interested in natural history, hillwalking, music, woodwork and painting.

View my complete profile
All images are copyright Sarah Longrigg unless otherwise stated. Please ask for permission before using elsewhere.